The Unity in Writing logo is a simplified schema of a book. This is a sketch of the structure of a book – or let’s call it a “book box.”

Using it we can highlight all the parts of a great story and see how any draft compares. 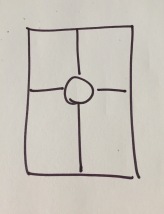 First, we have the concept of a great idea and we will eventually find the words to describe it in the form of a book.  It has scope and is something. This is the starting box of the sketch.

This great idea, or concept, has a center. The center is the primary idea from which all the content flows. It is the center around which unity is built. Along the outside, along the perimeter, run all the words.

The story also has a beginning and an ending, so we draw a line. Here is the entrance to the story world.  Time turns like a clock in the sketch.  By the end, we will return to this beginning point — utterly changed.  Openings and endings are often crafted to be mirror images of one another.

The unfolding of a book is exceptionally well-structured. The biggest pieces of structure are the beginning, middle and end  – or the 3 Acts. Act 2 is twice as long as the starting and ending acts. It is where all the story development takes place and is cut in two by the story midpoint. 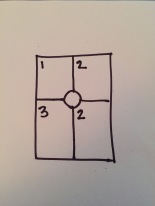 Additional lines can be added to mark other units of structure, such as plot points and chapters.

This simple diagram can be used in teaching writing craft, to aid in brainstorming and structuring a new book or checking whether you have all the expected parts.

It is at the heart of using Unity in Writing as a Design Principle and End Goal.